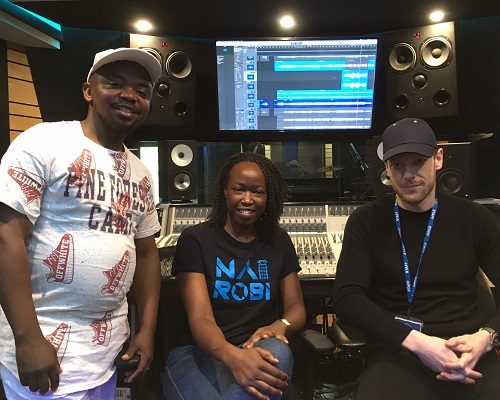 Nina’s new album release is coming soon! Her new year took off with a bang in the AMP recording studios in Nairobi.

After exploring a more culturally fused sound on her previous album “Dala”, Nina goes even deeper into the authentic sounds of Kenya in her upcoming release. The traditional elements of Dodo and Isukuti rhythms, Taarab and Bango notes resound in the melodies as the songstress adopts them into her own signature sound while singing mostly in Kiswahili.

Nina’s desire to prominently feature Kenyan guitar riffs led her to the Nairobi based Congolese musician Mabiza Mabele – a force to reckon with in his signature style of playing Eastern African music. The guitar maestro has mentored a number of the new generation of Kenyas guitarists. Other reputable Kenyan musicians joining in the album project are Mike Munene (bass guitar), Biron Orore (drums) and Erico Kyallo (percussions).

As an additional spice from the West, Nina once again features her European horn section and collaborates with trumpet player and German horn arranger Christian Spors.

To wet her fans’ appetite before the album release, some songs will be shared on her social media platforms so stay tuned!